Phoenix Market City a pioneer in getting the best together.
A well known Brand who has got Pune lovely names under one beautiful roof. Be it Shopping, Entertainment or the city's love - Food. So it came as no surprise when Phoenix Market city and Carpe Diem (PR) another famous name responsible for taking all the good things closer to people organised a Food Trail 1.0 for some of the best restaurants in Phoenix Market city, getting Pune food Bloggers together for an exciting event not witnessed before in the city. Exploring different restaurants in a fun way and trying unusual dishes.
So on a lovely winter weekend afternoon all the food bloggers assembled at the Liberty Square and thus started the 1st Food Trail.
All of us were supposed to pick chits to chose a restaurant and then another chit to chose one special ingredient. We were now supposed to dine at the Restaurant chosen through the chit and try out an unusual dish based on the ingredient written on it. We were given a voucher of  Rs 1500 for the same.
The air was filled with enthusiasm and excitement. All were ready to embark on this unique challenge and you could actually taste competition brewing in a friendly jovial way. Everyone was eager to start the race and so was I. Fingers crossed anxiously as I waited for my chance to pick a chit whilst others told what they got, some said paneer, someone corn and I heard chillies from another. With bated breath I picked out a chit and ....I was a happy baby I got my favourite ingredient - Prawns and as usual what followed was a little prawn dance in my head. Prawn dance, prawn dance, prawn dance, prawn dance. Well I just had to stop it and return back to the competition (sigh).
The restaurant was Cuba Libre. I hadn't tried this one yet and this indeed was my first time. I was nervous of how things will work out and yet excited.
So I rushed to the third floor along with fellow bloggers who had got the same restaurant. The entrance to the pub looked pretty small.
I again nervous as a cat walked inside to find a huge bar I had seen in a long time. My hopes rose and I started imagining lovely pub nibbles in this plush bar. 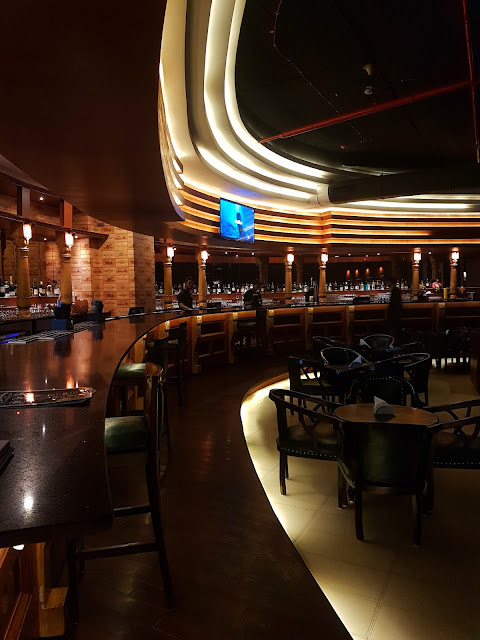 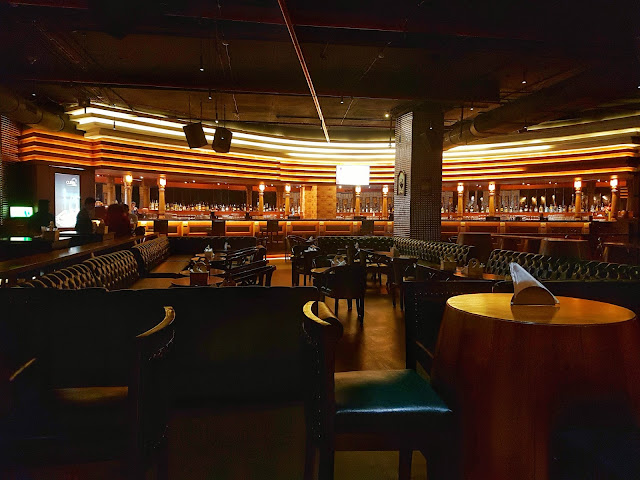 Then started some research as I buried myself in their menu trying to find Prawn things and quite sure that I had hit jackpot.
No sooner than that I was thrown rather pushed from my cloud nine to ground zero.
They had three, exactly three prawn dishes on their menu, in their whole menu. JUST THREE. I was doomed. 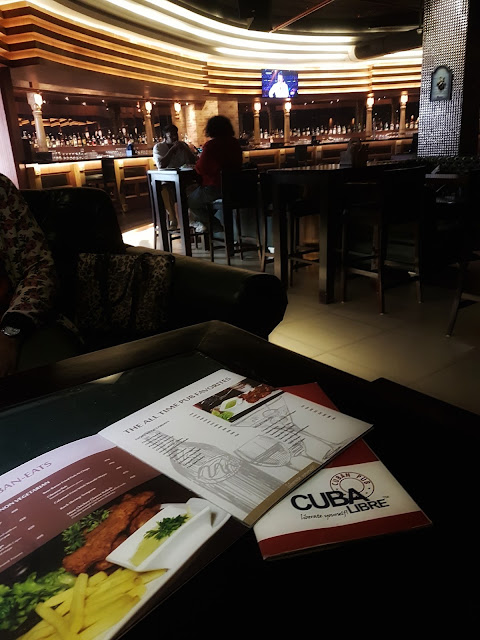 Out of them one was the classic and an all time favourite Prawn Tempura. Now nothing is unusual about this dish and everyone knows it thanks to its simple, beautiful, crunchy and sweet flavours.
Now out of the two remaining it was not the case of the best but that of the unusual. One was Prawn chilli which is on their Bar signature menu ( again another favorite ). I decided to take a risk and bet my money on Oven Baked Prawns which was relatively unknown and quite unusual - if I may say so myself.
Game was laid, dice were thrown - So Oven Baked Prawns it was from their Cuban eats.
As we waited for the food to arrive, we used the time constructively in what else but click, click and more click until I ensured everything was clicked what had to be. After I was satisfied and content   there was some more time left still, so we went to trouble our fellow bloggers sitting next door and troubled them good. Competition should be fun na, now don't you agree.
Well troubling colleagues - done and here I waited for the pinky prawns.
and they did arrive. Small succulent pieces waiting to be devoured. dressed in chilli, thyme, basil, other herbs and garlic and then oven roasted to cook them uniformly and yet have that slight crunch. Dusted with Parmesan cheese and served with cherry tomatoes. 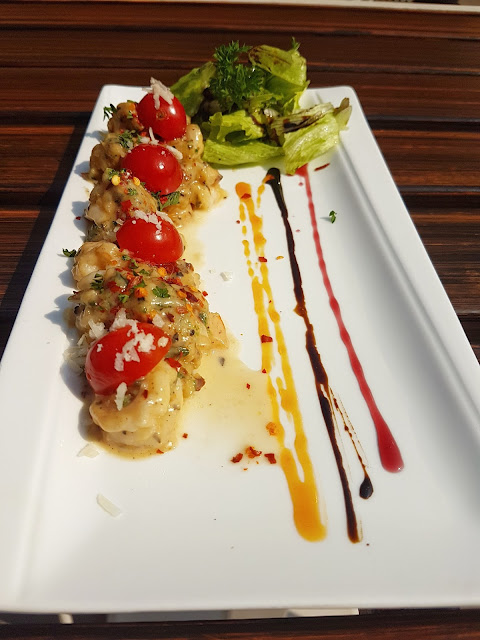 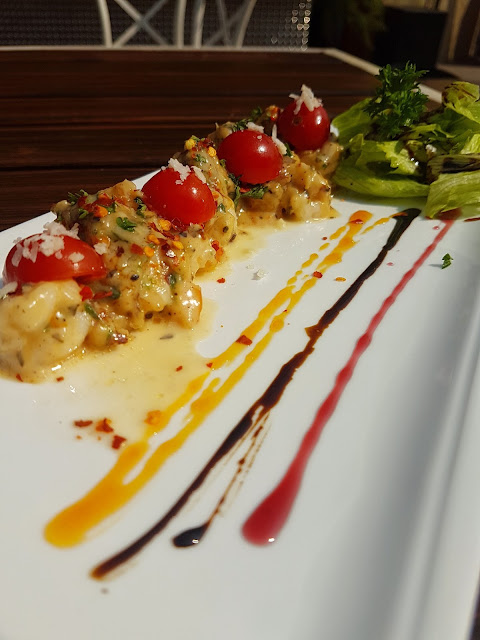 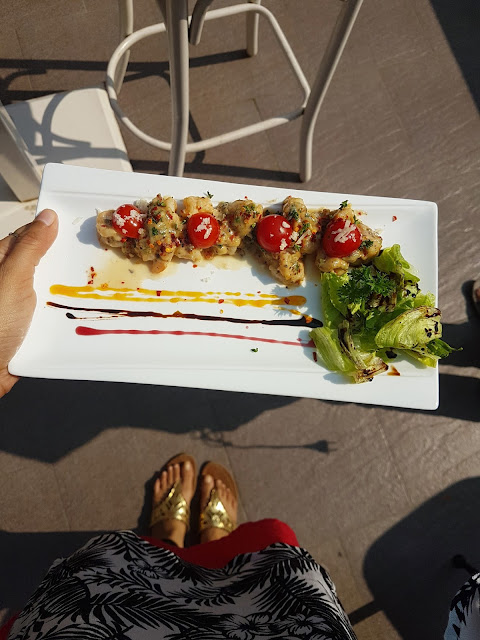 Such simple flavours but made the dish so unique and unusualness of this dish were the really simple ingredients and flavours which stood out by themselves and came together in such a delicious way.
The prawns were cooked perfectly had that crunch and yet were creamy. The garlic and chillies added a punch to the sweet juicy prawns.
Excellent Dish.
It wasn't in the rules or anything but I just wanted a prawny meal in my head and the ingredient still was prawns so I requested the chef for some creamy Alfredo Penne pasta with prawns and it was perfect. Chef also added some veggies to it and was I happy. I love my pasta with veggies and some meat and here it was just the way I like. Many people think that prawn makes the pasta smell sea food kinds but honestly when done right - its magic, the juicy sweet prawns in that slurpy creamy pasta anyday. Better than chicken honestly. 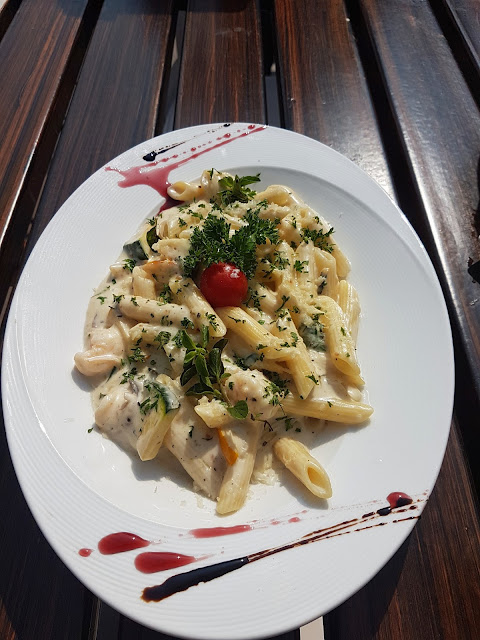 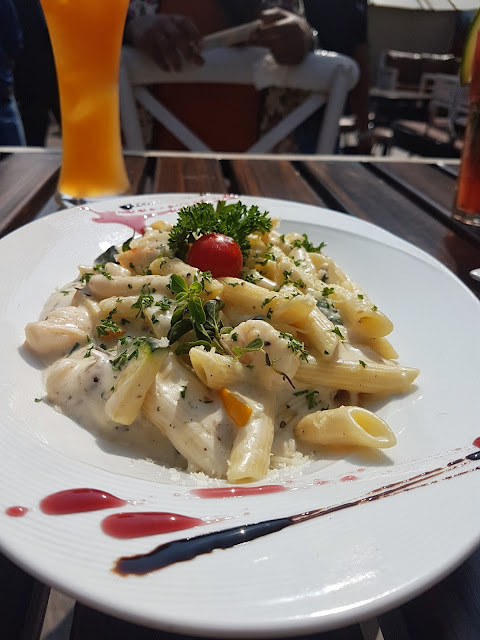 Well this was what I ordered along with some lovely mocktails (not cocktails, you see it was a competition and I needed to be sharp na,, what yaar, don't judge me now ). 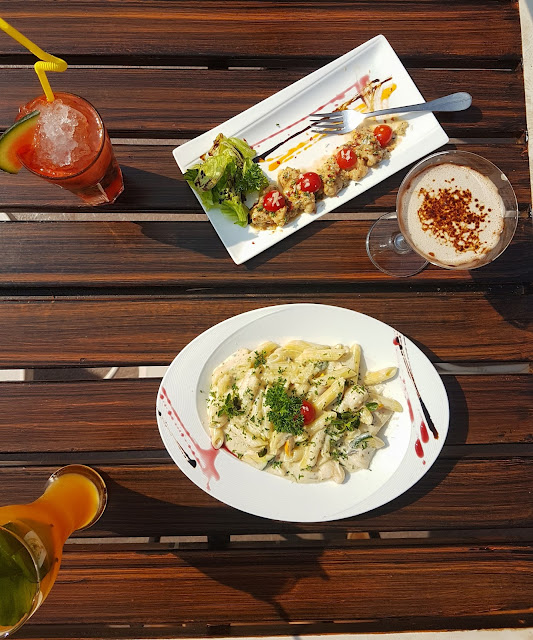 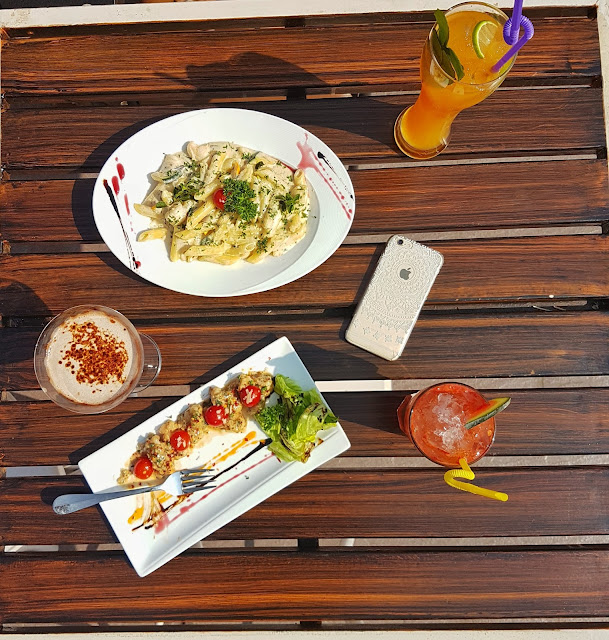 I also tried their Paneer satay and Chicken bbq Pizza which were a bomb and extremely delicious. (These were ordered by fellow bloggers for the competition.)
So meal done after a lot of pictures from every angle and lot of posing and bytes for the Phoenix Market city and Carpe Diem Press ;p We were actually feeling like celebrities.
Don't forget all the teasing and troubling the rival teams had to undergo.
Amidst all this I had a fantastic time and my very first ever food trail in any form. I loved it, excited for more, much more after all yeh Dil Mange more na. (one odd prize in some category, I hope you are listening ;p) It was a Happy Fun Day.
On a more serious note a big thanks to Phoenix Market City and Carpe Diem for having me over for the Food Trail and congratulations for pulling off such a fun event with success and utmost ease.

Another big thanks to the judges for keeping up with my random rant.

Check out behind the scenes and all the gossip here -

Until we meet again.
xoxo
Bhakti

Posted by Bhakti Khade Rangoonwala at 2:04 AM