Adventure on our way back from Goa

Every trip is incomplete without an adventure. You need something to remember the trip by, don't you ? 😉

This time when we (hubby and me) were returning from Goa, we were caught into a complete adventure movie setting. Yeah, that's right.
We wanted to surprise our parents and hence left by 3pm, so that we could be there with them for dinner. Hardly did we know, we were setting in for an adventure.

It was 12 th May, we set in great spirits, enjoying the journey and the long drive, wanted to pass the ghats before nightfall. We were approaching just before Kolhapur around 7 pm, before Gaganbawda and were glad that we were on time, little did we know what was lying ahead.

Right out of some drama series, the wind gathered speed and started billowing like mad. It was crazy, the sheer strength with which it was roaring to go. On our way we got 3 traffic jams due to trees fallen in the way. We surpassed them and continued, though delayed a bit.
In the forest of Gaganbawda, just before Kolhapur, the wind didn't cease to blow, but now the sky started roaring as well, then started the dance of Thunder God. And no sooner than we blinked heavy rain like never before started pelting. It was raining not cats and dogs but elephants and horses. There was no visibility at all. The car was livid with the huge rain drops pelting on the metal body and creating frightening noise which was nothing as compared to the thunderstorm outside. We were hardly feeling safe in the confine of our car.


We couldn't wait, as this was a no mans land, we were in the middle of a jungle, with no soul in sight. The massive trees were taking the wrath of nature and could succumb to their life any second.
We couldn't wait as trees were falling. It was so scary, literally had our heart in our mouth and were frightened like crazy.

Although we continued at a snail's pace we met our worst nightmare. A tree fell right in front of us. It was a huge tree.
Now we were thanking our stars that it didn't fall on us and at the same time we were really shaken,we were in a grave situation going by the looks of it.

This deserted forest meant, were we stranded for the night, all alone, I was getting creeps.

Luckily for us,soon enough there were few vehicles who joined us on both sides. There was no use calling the helplines, as they wont come before dawn, in this remote area.
We travelers took this task up and were trying all sorts of means to remove the tree, a truck driver tried to pull it after tying it up with no avail. In the end after 2 hours in the heavy rains, it was decided to chop the fallen tree, so that it could be moved, the truck drivers had an axe and a big knife, people started kicking the branches, cutting the tree, pushing it.
This took hours and by the time we handful of travellers were at it (all men , hubby included) who were first to the scene, there was a big line of vehicles behind us by now. People went and requested others to help as it would quicken the pace, but to no use, they were not bothered. They were nicely sitting in the car listening to music, as the work was being done by others.
Pathetic, people are not ready to share responsibility, this is the country we live in, where majority of people, have this outlook that we are not bothered, the work will be done by others. These are our fellow country men. It's apalling. Disgusting and disappointing to the core. They just want to watch the drama unfold from their comfort zone. (tamasha dekhte hain, karte kuch Nahi) I think their conscious is dead, and this is why they are shaming the nation, humanity .
Yet a small group of people, take things in hand and change the situation, proud of such people, no matter what the number, no matter what the consequence.

Eventually, the road was vacated from the fallen tree and the traffic started moving, thanks to the hard efforts put in by those involved. 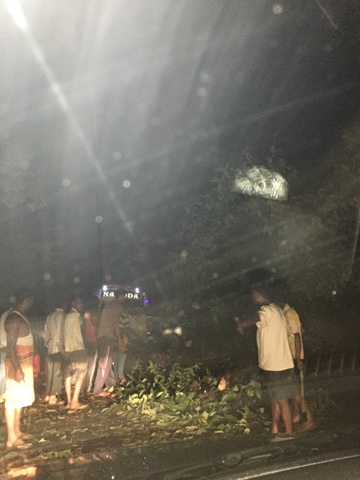 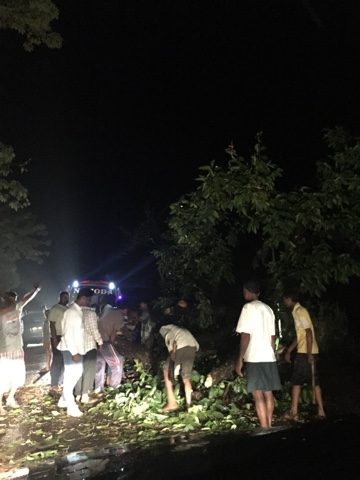 It was so late by now, that we were hungry for food, nothing was available on the highway or in Kolhapur. We reached Pune by 3 am, were so hungry and starving, had Burji pav on station. 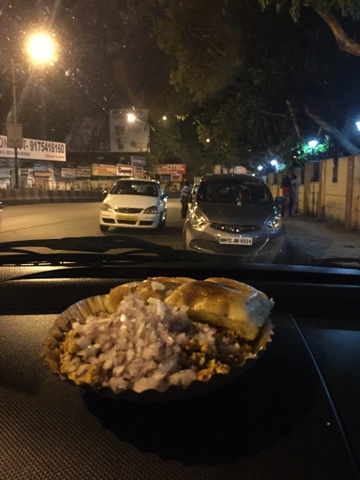 One hell of an adventure, another journey always to remember .

If you have any adventures to share with us, do write in to me.

Posted by Bhakti Khade Rangoonwala at 2:37 AM