So after that scary, spooky, nerve wrecking and sleep deprived night I was one wreck ball with eyes shutting just sitting in the safari jeep my head bobbing away to sleep with the beautiful early morning breeze caressing my face to lull me off to lala land while simultaneously being cruelly awakened by the jerkiest jolts and potholes and the painful impact of sheer body weight and bones against the iron jeep. This is how I started my very much anticipated first ever jungle safari in Corbett in Dhikala core zone which is a big deal ( the jungle aficionados will know ). I was in half awe of the magnificent forest. Just half cause the other half of me was too drowsy sleeping.
Which was again short lived as the sun came up and shone with all its intensity on what appeared or seemed only on me. He was just there to rob that tiny little shred of sleep. As I came to terms with it and started enjoying my safari, the jeep stopped suddenly without warning near the bushes for a tiger sighting. There was a tiger, real breathing, uncaged mysterious magnificent monster. I was getting excited, my first ever tiger in 6 years of jungle safaris and they really mounted to many. Just imagine my happiness which was as short lived as an ant or may be even shorter. Rewind to the part where I told you I was with my family on a wild vacation. So my wild crazy family in which most of them are tall and were on the side of the jeep nearer to the tiger didn't let me get a glimpse of that beautiful beast in all their excitement ( there first tiger too ) so what I saw was the tail of the tiger or something resembling it... my very first tiger sighting in 6 years indeed.
A long tail after a 6 years of long trail. Should I say now I understand the concept of Bhais ki Poonch (buffalo's tail) well I saw a Tiger's tail.

Grumpy, jealous and angry I started to see and imagine . Like a lost, thirsty traveler in the desert looking for an oasis. I saw plenty of Tigers in the blades of grass, a black nose on faraway rocks. A shadow sitting under the never ending barbed bushes or just yellow stripes camouflaging in the running trees ahead. I had become a tiger maniac and just as I told my heart that I shall see one sooner, on this trip for sure, the day ended and all I had was not the eye but the tail of the Tiger. I saw pretty sights, a herd of sambars ( Indian antelope ) crossing the river by the sunset bright. 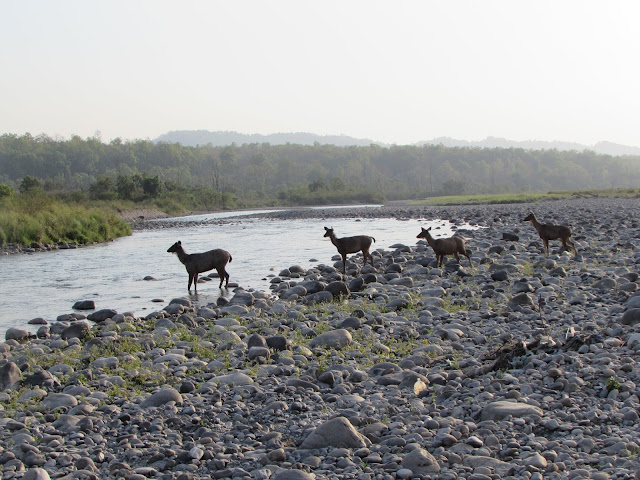 The magnificence of the jungle magnified, the grandeur and spell it cast on me. We even had our jeep racing after others in the trail of another tigress going towards the river. But to be honest the day ended with a feeling of haath ko aaya, muh na laga... I was really heart broken, you ll feel one gets used to failure or how should I say dowsing ones excitement but with all honesty. We learn to take it with a pinch of salt but every failure hurts like the very first one, its the same. I thought in 7 years I was used to not spotting a tiger, I was wrong- it still hurt... perhaps more.
Nothing like tasty food to make one feel better. Well it always works for me, always. After an hearty veg meal, that's what you get in the core area, just eggs, no meat. Simple food is the best especially in the middle of the jungle after a strenuous and bumpy ride - quite literally. A good night sleep with no more fan fiascoes and jungle dreams at our cozy resort in Dhikala. A dreamless sleep also does wonders like no other.
Next day the jungle was calling for a fresh start. As always I told my wits to cool down and just enjoy the beauty and save myself heart breaks of the previous day. As soon as we entered the jungle, there was a lot of excitement, more than normal, the driver spoke to another in their native tongue and revved the car, the cool wind blowing on my face, felt so alive, the sunrise which had just taken place, left everything pale orange in its aftermath. It smelled of dew drops and fresh leaves and mud a little wet with dew drops and all that revving the cars had left an earthy taste of mud on my tongue. As I was enjoying these smaller things in life, this pretty forest in all its glory suddenly we came to the river where almost all the gypsies were waiting, patiently. The same spot where we were racing to just at sunset the previous day to get a sighting of a tigress with a cub. Well, the early morning seals do play over there or may be some elephant bathing. As I told myself and still heard my heart pounding.
As expected there stood a large lone male elephant so beautiful in water and he was crossing, never had I seen it in reality and it was an amazing sight to see him cross the river, that explained all the people waiting. After I took that amazing sight in, I looked a bit to its right to see a sambar transfixed to its position, so tense I could literally feel it in my own bones. 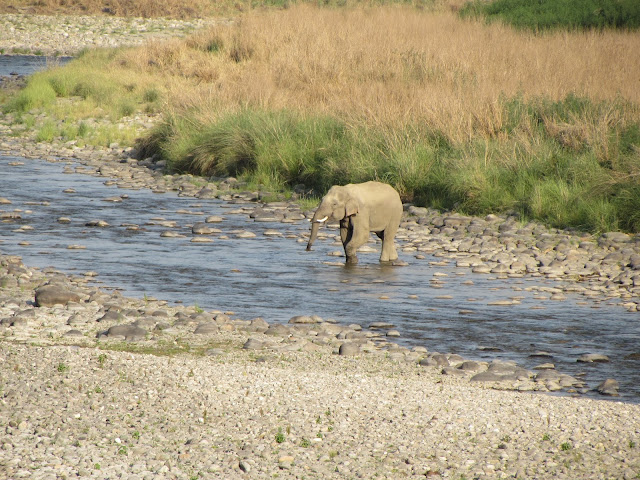 I was silencing my heartbeats as someone started talking about the tigress resting there who was not coming out. And started my first ever official wait for the tigress. Oh it was worth it, worth the seven years when she leisurely got up after making us wait for what seemed like eons and emerged royally from the bushes. The authority she held, the respect she commanded, the walk she walked of owning each and everything in her wake. This was her kingdom. She met our eyes as if from so far away, she held the gaze and I was mesmerized for life. First Tiger spotting was that of a beautiful, enigmatic, aggressive, strong mother warrior. She came for a few minutes, she looked at the sambar and she took her time and just like that she went back to the bushes as if saying not today, not now.  The sambar ran away for his dear life. It was his day to live. What more could I have asked for. We couldn't see her cub, he must have been in the bushes.
May be more. May be whatever I would have asked for at that moment would have been less, cause what was gonna follow, I had never imagined neither had an inkling. 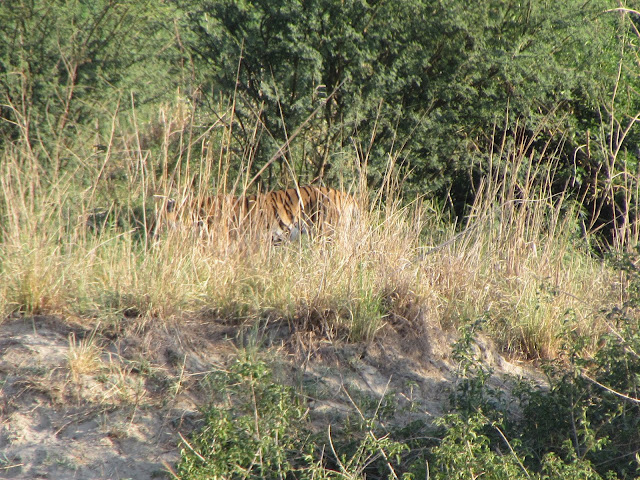 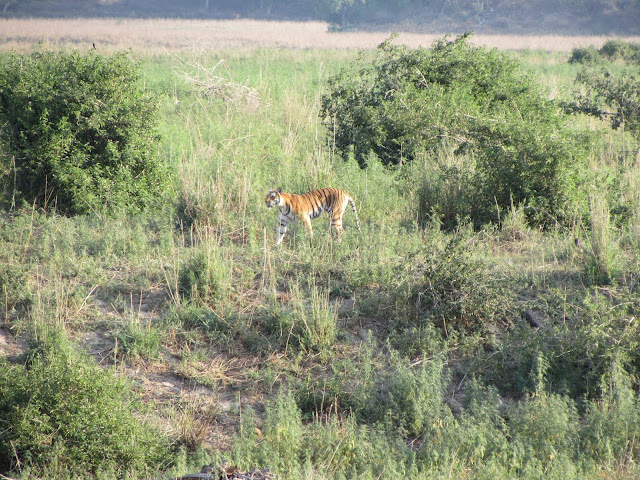 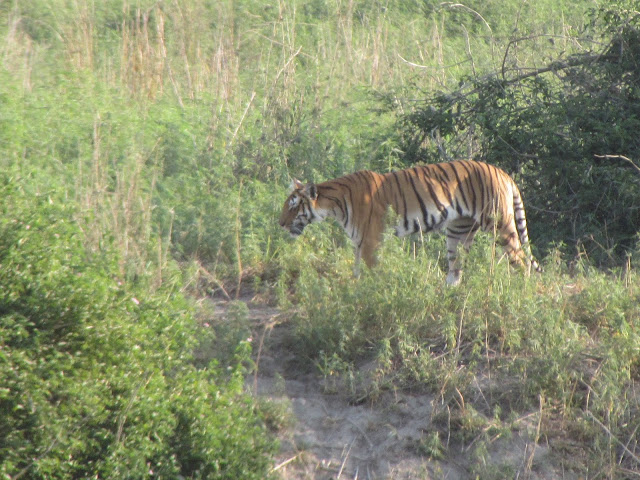 We drove away from the river, deeper into the jungle even as many jeeps still waited there for the magnificent tigress to emerge again. We were content, speaking for myself content is a small word, I was so grateful for witnessing that tigress, leap out of the grass so nonchalantly, gracefully and yet so powerfully. That is etched in my mind forever and now the jungle was calling again with its pretty enchantments and spectacular life to be witnessed. We saw a beautiful blue bird feed its little in the nest whilst it was still flying. We saw monkeys sunbathe, herds of deer enjoying their breakfast and as I settled in my spot letting the sun seep into my bones whilst I enjoyed the jungle breeze, the woody aroma, the twittering colorful birds. 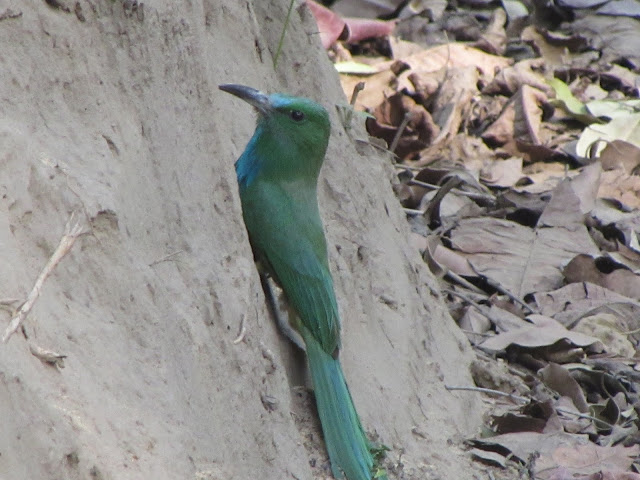 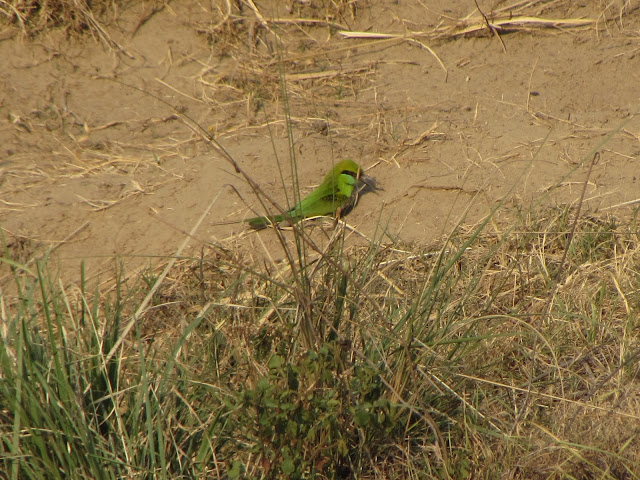 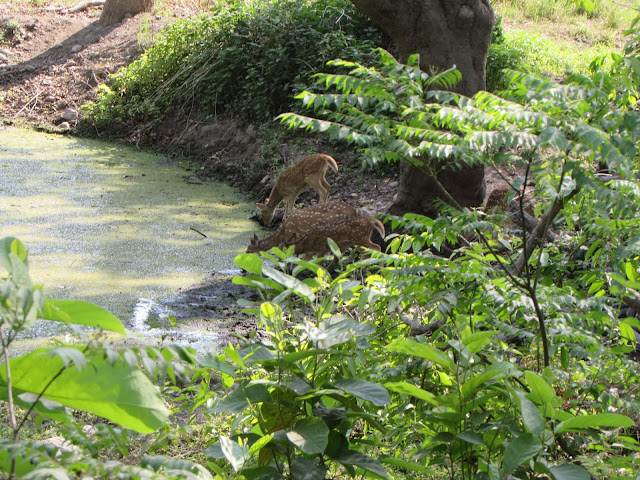 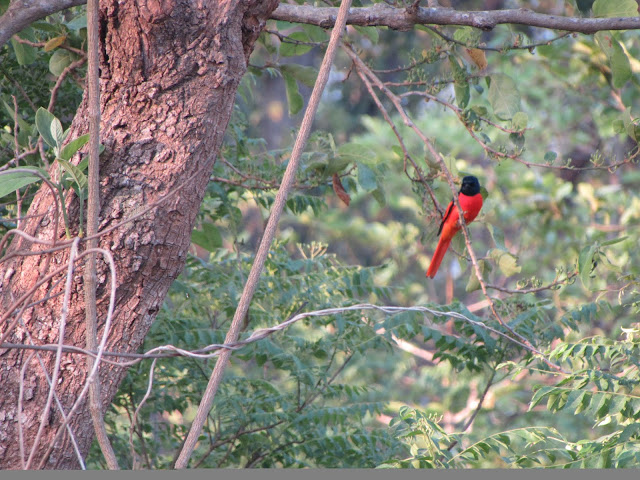 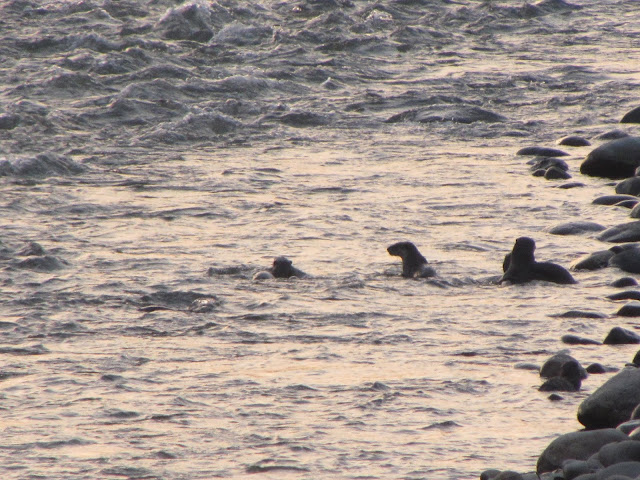 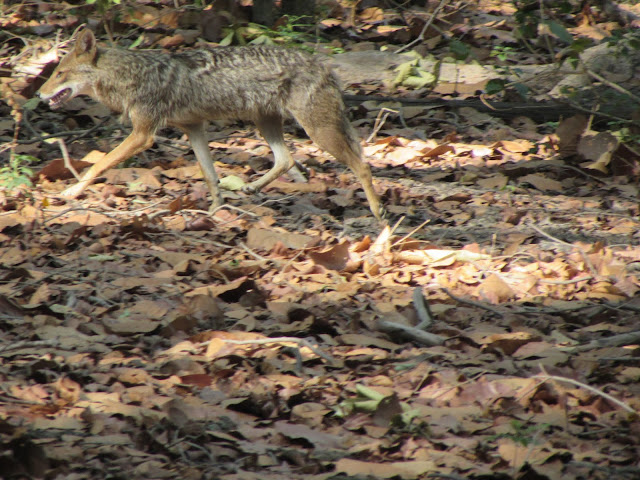 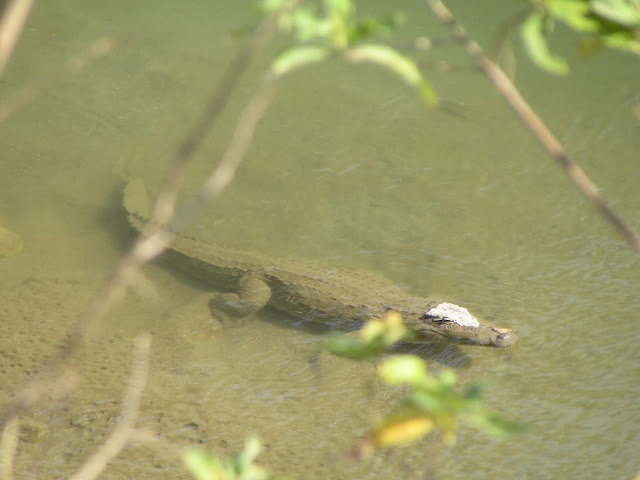 The jeep came to a sudden hault in front of a big pond and till the time I adjust to what I saw, it left me awestruck. Never in my wildest dreams had I imagined national geography or discovery documentary unfold in front of me live. There in front of me just few paces ahead lay an entire family of elephants with the babies and the matriarch and everyone in tow. There were enjoying their mud bathing ritual, the baby elephants played about, rolling in the mud on the banks of the pond. The naughty youngsters indulged in sharpening their combat skills (teenagers I tell you ). The matriarch stood ahead of everybody, alone, enjoying her me time and keeping an eye on us. No body dared disturb her. I am an elephant lover and have watched many documentaries like this and when I got to really see this I was so happy I can't put in words, as I watched dumbstruck another herd of elephants came from behind us and joined the pond. Now that was a crowd I always want to see, wild elephants in their habitat, as I watched them, these intelligent creatures their family and social bonds so openly visible, these massive giants. I just wanted to stay there but as more jeeps arrived they started getting a bit agitated so we decided to leave. And as we left, I kept looking back to the magic I witnessed, wiping my eyes to find them moist, I hugged myself, my hands tight as I had goose bumps, said a big thank you to the universe and just sat still. This safari was already the best safari of my life. 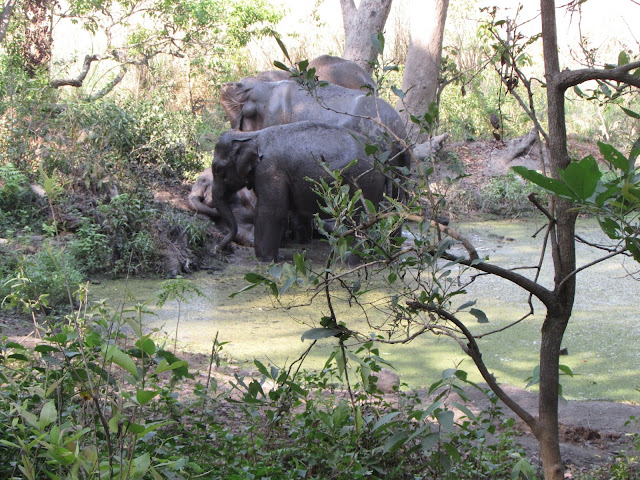 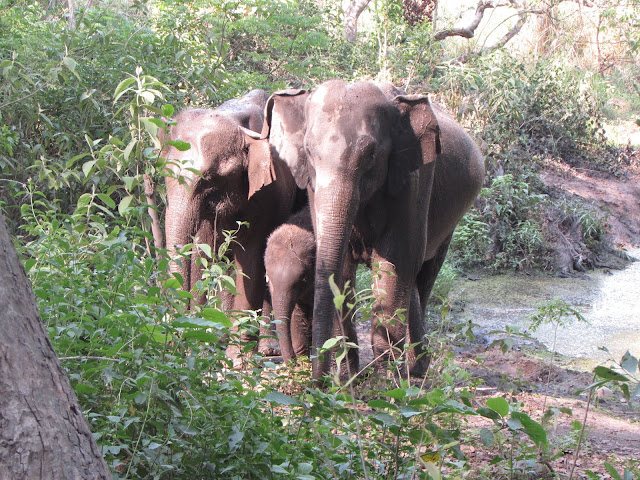 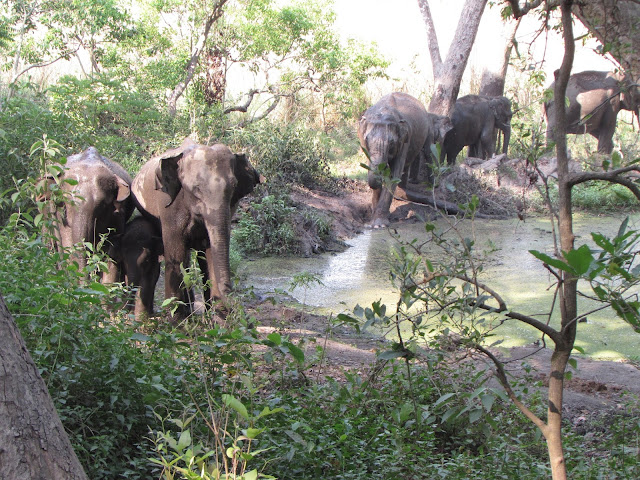 We had some beautiful sightings and were already making our way out of the jungle and as we passed we heard the monkey give a frantic call (monkeys signalling each other on spotting a tiger ).
We raced to the place this was the same hillock where we had missed the tigress on our earlier safari expecting her to be there, this being her territory. What greeted us, no one expected.
A small tiger, who looked powerful and yet had this innocence written all over him. As our guide enlightened us this was the cub of the tigress we saw earlier and he waited here for his mother to come pick him up. All of 8 months and he already looked like a mini grown tiger but that innocence just melted the heart. He was so close to us and so unfazed. Just sleepy and waiting for his mom. We waited there for what seemed like eons in one second and in another what seemed like a fleeting glimpse. The concept of time fell short or under described for this innocent beautiful beast who sat in front of us. That sight, that setting sun, his coat glowing as if on velvety fire. His razor sharp teeth peeking out when he gave his cute yawns, which he did all the time. A cute cub and yet an aggressive majestic beast. What do you name it, how does one put it in words. I just stood there and watched till I could for very soon (lost the concept of time as mentioned ) it was time to bid farewell to meet again the heart and soul of the jungle. 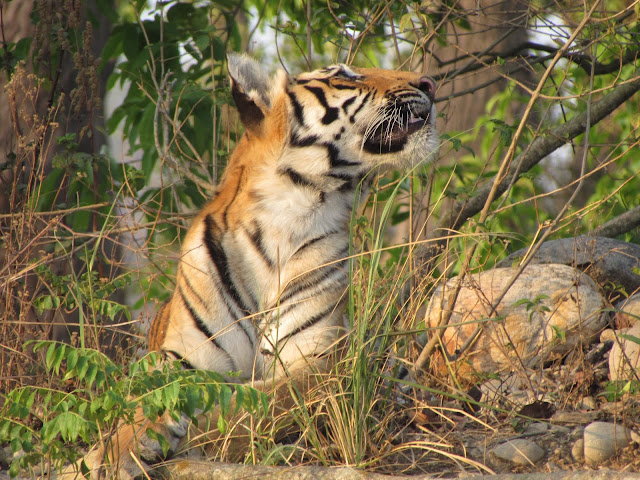 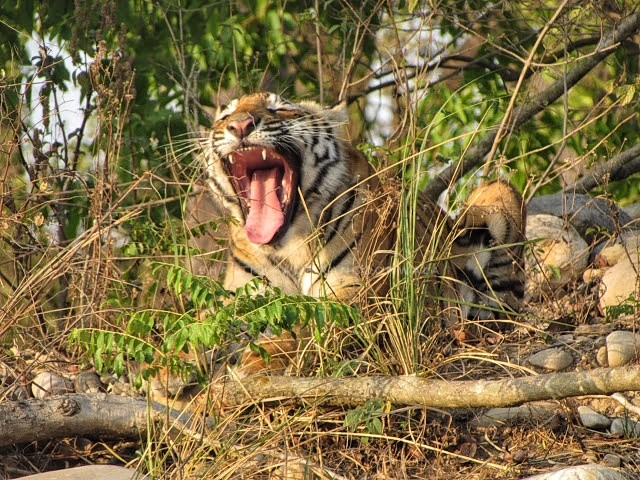 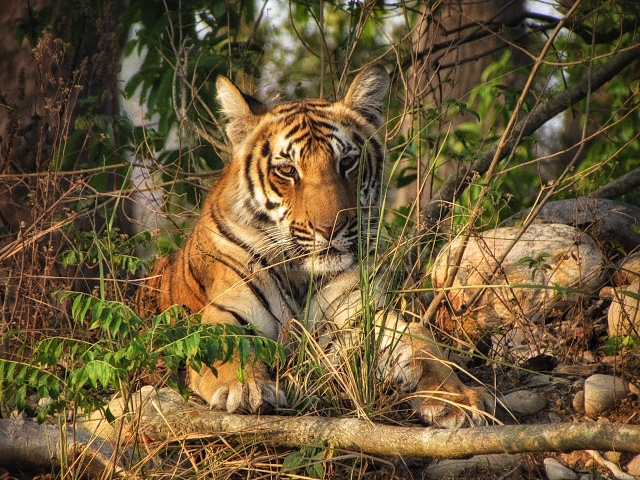 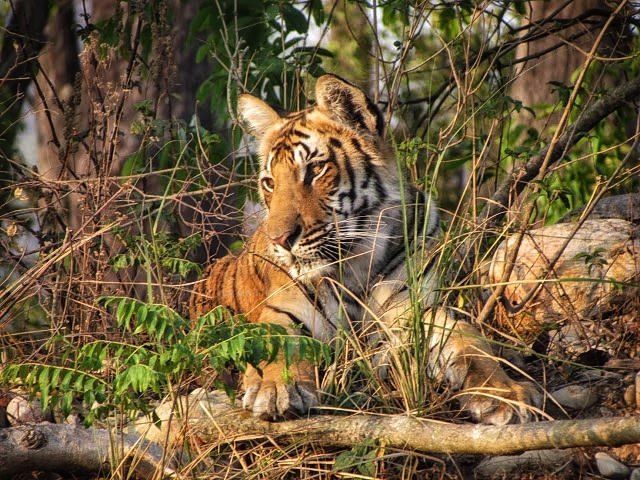 To be one with the free spirit of life and nature. To feel so small in front of this mighty life, these beautiful creatures, this raw feeling that one dissolves in oblivion. To cease to be and to wonder about the phenomenon of this circle of life in this most raw form. I will be back till then its a heartfelt good bye.
The sun set over me with a heart which was exploding from all that I had seen. Time will pass memories wont fade and yet with the fear of forgetting I pen these down to make them eternal. 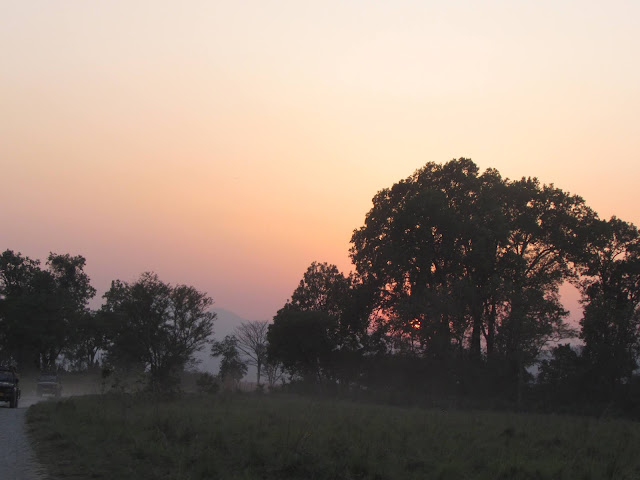 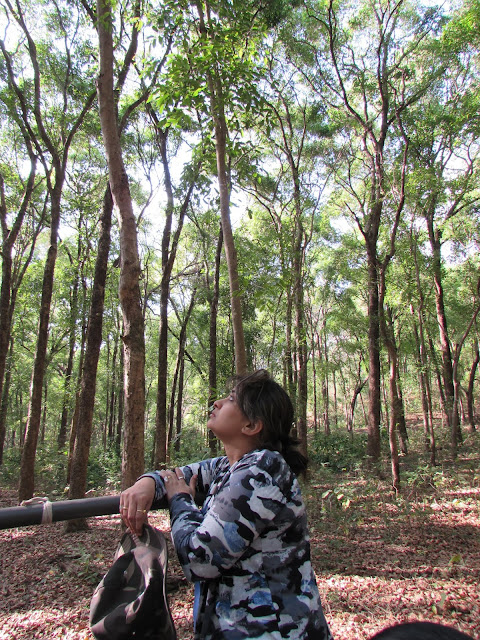 Check out the vlog - tiger sighting, elephant bathing and other sightings here

Posted by Bhakti Khade Rangoonwala at 6:34 AM