Nature with its magical Inspirations #naturesfriends

Nature can weave you in its magical web and inspire you to do the unknown beyond your dreams.

One such story I would love to share with you, so innocent yet so powerful. Nature does wonders we still fail to comprehend to the fullest.

On a hot summer afternoon in Pune, a little girl of 6 yrs of age was playing on the terrace of her home. While playing with her doll, she decided to bathe her and went to one of the small olden drum filled with water in order to water plants. Standing on her little toes and peeping inside the drum to take some water, she saw a black thing in it. Scared to her wits, she let out a little scream and ran back some steps. Curiosity got her back tip toeing to the drum and peeping inside with one eye shut and legs ready to sprint again. What she saw didn't scare her, but melted her heart, a black crow, had fallen in the drum and was trying hard to stay alive. A feeling to help him overtook the fear, she was not that brave to touch him and pull him out.
God alone knows where she got the idea from but the little girl took the small bucket meant for watering plants and dunked it in the drum until she scooped the crow in it, she further emptied the bucket on the floor in a shaded area and out of fear of the creature ran for her life. She did come to the terrace in the evening, however the crow wasn't there. She felt sad on not seeing the bird but was also glad that it flew away which meant that he was alive.
When she descended the staircase she realized there was a crow sitting on the brim, too close for any other crow she had seen. She mustered courage and went near it, the bird stood its ground and didn't fly off. A child's impulse, she stroked the head of the crow and it still sat there. She ran off to tell her mother about her victory, she never ever saw that crow again.
What she didn't know was that incidence had changed her beyond her thinking.
She started loving nature unknowingly, started looking after small insects, giving small grains of sugar to the ants, watching the vibrant colors of the lady birds. She wanted to save nature to safeguard animals, the feeling that she had got after saving the crow and petting it on his head was unparalleled. It made her friends with nature and its creations, the urge to safeguard them, to play amongst them was magical.
after her mother told her that the crow must have fallen in the drum trying to drink water, she
started keeping water for birds in a shallow vessel on the terrace for them to drink and she followed this for years and I still follow this. Yes that little girl was me and that crow was and still is my inspiration why and how I became friends with nature. I still water and grow plants in the hope of saving lives related to it directly, indirectly. I still get really heartbroken when on highways I see mountains being broken up to make way for buildings. I Dance with joy and am happiest with nature, gurgling streams, chirping birds, creations of nature.
That afternoon a crow changed me, helped me understand true love for nature and its magnificent creations. Lesson I learned then but understood now. Inspired by the crow then but understood now.
But isn't it that lessons learned in childhood are learned forever, they get etched in the heart.
Every child should be taught to befriend nature, to love it and safeguard it. Its the need of the hour.
Importance and magic of Nature in its truest form. 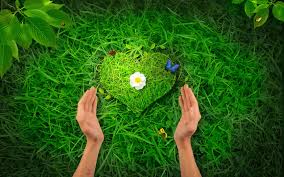 p.s This post is written for Kissan  #naturesfriends contest http://www.kissan.in/